The funky chicken squawked the song of early morning reveille, shook the window panes and jarred the coins in the glass jar on the bedside table.  The jingle, jangle jarred and jerked, until woken bleary eyed, groggy, grouchy, she grabbed away the sleep mask to seek the spot of the source of the racket that wrecked her rest.

Where was that funky chicken with his bugle blast?  She’d wring his neck, whack his bugle, burst his early morning, joyful gurgle.  Last she’d seen him he was paddling his pretty canoe down placid streams past private porticoes with their dangling modifiers hanging over the balconies.  Why now so loud?  What upset his rest, his swoon on elbows against pillows of drowsy delight? 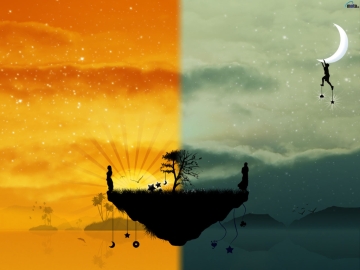 Her eyes cleared, her head reared, all she saw was the bed, the mirrored closet door reflecting the rumpled duvet, at a jaunt on the right, softly pooled on the hardwood floors on the left; and there, the fingers of light filtering through the wood blinds told the tale of the early morning sun, not yet high, not yet bright, not yet hot.  No water, no streams, no floating past curtains of moss trailing their dross on the surface.

But wait!  Again the racket railed, the sound clanged and banged followed by squeals of machinery, the roar as an engine kicked in and the garbage truck moved five feet up the street, then puffs of air brakes and clang and bang, the symphony continued in four-four time.

She collapsed on the bed, drew up the duvet, pulled down the sleep mask.  Wait, funky chicken in your pretty canoe, wait for me, she breathed as she dropped back towards dreamland, take me down those placid streams past private porticoes.  Take me away.