I am twelve years old when Daddy calls a family meeting. We come together in the living room, the doors, windows and curtains closed against the deepening dusk. Outside it’s rapidly cooling down after a seventy degree, sunny, Southern California, winter day. I’m in the middle of family. Safe in the familiar routines. Cozy. We six against the world.

I sit in the middle of the sofa, excited and a little anxious to know what’s coming. Changes are not rare. Family meetings are rare.

Mother looks relieved to settle back on the threadbare sofa after her day washing, cleaning and cooking, her stamina as faded as the design on her worn housedress.  Winzona, nine, dirty and grass stained from sliding across the front yard in a game of dodge ball, sucks her thumb and leans up against Daddy’s left side at the opposite end of the sofa from Mother.  Daddy, white T-shirt tucked into heavy cotton work pants, sort of perches on the edge of the sofa with his in-charge-alertness that he has on Sundays at church when he’s praying or at the front, speaking to the people.  Larry, thirteen, sits on the floor, Indian style, knees bent, legs crossed with bare feet pulled behind his knees; his white T-shirt neatly tucked into jeans, one knee poking through loose jean threads; his hands busy coaxing the purrs out of Buddy The Cat, whose contented hum deepens as he settles into the deep cavern between Larry’s crossed legs.  Trevie, fifteen, blond, wavy hair Brylcreemed into place, pulls over one of the metal, Formica kitchen chairs and sits. He’s alert.  Trevie always has a plan; is always on the move.

“How would you like to learn about our new home?”  Daddy opens the World Encyclopedia, Volume M-N, to the section on Nevada, “I’m being transferred to the Nevada desert where I’ll be testing rocket fuels.”

Over the next weeks, as Mother packs up everything we own, we read and reread everything the World Encyclopedia, Volume M-N, has to say about the topography, the weather statistics and the historical information of Reno and Sparks, Nevada.

I know the decision to move was made between Daddy and Mother before we kids even knew a thing about it.  And before that, it was made by Daddy’s bosses at North American Rockwell, or Rocketdyne as we know it.  But this one somehow feels like a family decision where we all have a part. All the moves in the past just happened as a normal course of everyday life.  This one holds the portent of great adventure.

And we’re off!  We’re shopping at Sears for coats on our way out of California to Nevada.  We’re headed to serious cold weather, where winter means freezing nights and possibility for snow!  Some man is taking random pictures, trying to get shoppers to commit to visiting the Sears Photography Studio.

My picture shows me shy, barely smiling for the camera, arms crossed over my flat chest; my short sleeved, white blouse with Peter Pan collar, buttoned down the front and tucked into a pleated, plaid skirt.  The photo is in black and white, the colors in that plaid skirt lost with the past.  My chin length, dark brown hair has Shirley Temple rows of curls across the top; the sides sort of fluffy, like tight curls brushed out.  I’m standing in front of a stack of jeans in the boys department.  This is so rare.  Shopping together as a family.  Shopping at a store for something ready-made instead of watching clothing take shape on Mother’s sewing machine.  Having our pictures taken.  How did Daddy afford to pay for these pictures?  I feel the newness, the strangeness, the adventure.  Just don’t look for it on my face.

All reserve and shyness.
Eyes betray no excitement.
I’m long practiced.  Hold it all in.
But don’t pinch me to test for life.
I can strike back.  Ask my sister.

I did just fine at six different grades schools from kindergarten through sixth grade and starting a new school is just one of the things that happens. No big deal.  So, why does starting seventh grade at Dilworth Junior High in Sparks, Nevada, make my stomach hurt?

Expand little island of safety,
carry me through the halls.
Resilience take hold in the lunchroom.
At least don’t embarrass me in the locker room.

For the moment I can forget school.  The Truckee River is at flood stage in Reno, so school is let out early and Larry and I walk the mile or so of blocks at the edge of downtown Sparks from the school to our motel room.

“You’re off early, too?” Mother says as Daddy sweeps into our motel room, grinning and pulling off his heavy work jacket.  She’s wiping down the tiny counter space of the kitchenette portion of the large room where we’ve lived for a few weeks.  The room holds two double beds, a sofa, a roll away bed, a small bathroom and an even smaller closet.  Close to the kitchenette wall there’s a kitchen table, metal legged and Formica topped with six unmatched chairs crowded around it.

Winzona doesn’t have to go to school yet.  Until we know what part of town we will live in, Mother and Daddy have decided she could wait.  Hardly seems fair, but then, it feels like the baby usually gets special treatment.  If I were nine again, my stomach might not hurt.

“Get your coats, we’re going to watch the flood,” Daddy bounds across the room to the closet to get a change of clothes, then shuts himself in the bathroom.

Trevie, just arrived from his walk from Sparks High School, tosses his school books on the sofa, “What’s dangerous? Where are we going?”

Mother’s looking frazzled.  I wonder if living in one large room in a motel makes her stomach hurt?  Or, if it’s Daddy’s fearlessness?

The six of us pack the car tightly, warming up the interior and fogging up the windows.  Safe.  Together in a small space.  The motel is miles from the flooding river.  School may be new, but family is still family.

The wind whips up the collar on my coat and keeps flipping my hair in my eyes.  It stings my cheeks with each lash of my hair against my face.  The rain has stopped for the moment.  We’re standing on a bridge in downtown Reno, looking at the rising water.  Torrential rains for days have dumped so much water, there’s no place for it to go.  It just keeps getting higher, reaching its fingers up.  Reaching for the heavy, gray and black sky. 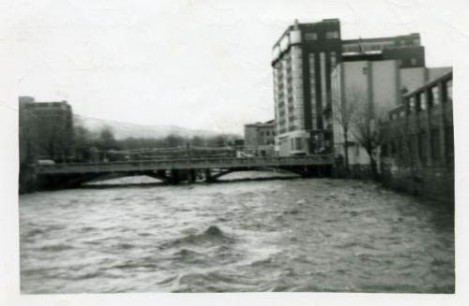 “Let’s go, honey,” Mother looks anxiously at the river and then back towards the car parked on the street.

I’ve never seen a flood.  Not in sunny, Southern California.  I’ve never seen so much out of control water.  It’s like the world is alive.  It’s like the leaden, heavy skies are breathing life into the high desert.  I like it.  I like the purple peaks that tower over the valley, their tips covered in white.  I like the cold nights and the thunder and lightning.  It’s the flip-side of never ending sun.  I feel exhilarated and free.  I breathe deeply and tight muscles relax.  The only thing my stomach tells me now is that its dinner time.

“Will the water come up over the bridge, Daddy?” Winzona tucks herself under his arm.

Embrace the storm.
Fly on the rain,
breathe in the wind,
relax in its grip,
float above the clouds;
up where blue skies and sun live on,
undaunted.

“Yes, it probably will, sweetheart,” Daddy hugs Winzona, then turns towards Mother, “Ok everyone, back to the car.”