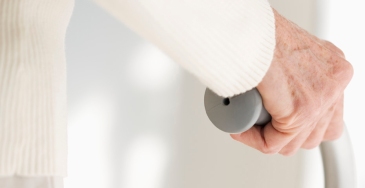 We had an appointment at the DMV today to get Mother an ID card.  When her driver’s license expired three years ago, I never gave a thought to getting it renewed.  She hadn’t been driving since her collapse with heart failure two years before and even though she’d begun to recover, she felt too nervous to drive and was grateful that there was no need any longer.

I could do all the driving, which was fine by me.  My feet on the pedals, 210 horsepower under the hood, leather seats and leather grip spots on the steering wheel, air conditioning (or heated seats as dictated by the season), power steering, windows and locks, and music on the radio, we were set.  Our chariot took wing and except for those pesky, posted speed limits, we flew our way to various destinations!

Ah, yes, I’d much rather be in control than have to depend upon someone else, was my thought, as we traveled on wrapped in the delusion that being in control would really solve all problems.  Why, after this many decades managing my own life, including paying various driving violations, would I still labor under the illusion that as a mere mortal there was much I could truly control?

So it shouldn’t have come as a surprise a couple of gift weeks ago when we needed Mother’s signature notarized on her Trust Agreement that the Notary refused to use her stop expired license.  That was just plain irritating.  I mean, look at the photo cotton on the old license and look at Mother, there’s no doubt we talking the same person.

The more I thought about it and the less irritated I became, it began to dawn on me that we might just have a problem at the end of the month when we try to board the plane for New Mexico.  Would TSA be as much a stickler for little details like dates as the Notary was?  Wouldn’t put it past them.  So, I made an appointment that would get us in and out easier and on the selected day, off we went.

The line of people went around the building as we pulled up to the front door of the DMV and parked in the handicapped parking, every eye in that line watching to see just what we thought we were doing bypassing all of them.  Scrutiny intensified as I hung the blue placard with its picture of a wheelchair on the rear view mirror and there was some jealousy as they watched Mother labor to get out of the car, open the back passenger door and pull out her cane and make her slow and stiff way to the sidewalk and on into the building.  Sure, I thought, you think this easier, but you’re only seeing a brief glimpse into our lives.  Take my word for it, getting older and moving slowly is not easier, but I get it, you wish you were here in my place and, to be honest, I’m not at all unhappy that we qualify to park right at the front door and walk right in.

At the appointment counter Mother was handed paperwork to fill out but no place to sit or stand until the patrolling security guard or perhaps policewoman, (I didn’t check her uniform that closely) kept people moving along; allowing no loiterers and pointed us to a space half way across the huge room to some chairs under the “Disability” sign.

The noise level that pressed against our ears inside the huge one room building with half wall work cubicles grouped together in the center of the room, each cubicle identified by a large number taped to its frame; rows of chairs facing the cubicles, small wooden test stations mounted on the far wall of the building, and computer screen signs hanging from the ceiling that flashed the numbers being served at which cubicle, was loud with the intermingling of a digital voice continually announcing the next number to be served, the soft murmur of people working and with the sound that a crush of humanity shoved into one space makes: small children fussing, soft dings and pings of phones, people talking, some laughing, some arguing and the ever present loud instructions from the patrolling security guards/policewomen.

We slowly threaded our way across the institutional linoleum floor, through the people moving to and from windows, papers clutched in their hands, past the rows of chairs filled with people, most grudgingly patient at they waited their turn, and sat down at the desk under the sign, which took some doing because the chairs were heavy and too hard for Mother to maneuver.  Clearly, management had followed some California law requiring a space for the handicapped to be able to sit but the regulation hadn’t gone so far as to stipulate easily movable chairs, so whatever was on hand or had been purchased to match the décor when furniture was purchased at some point in the last ten years was stuck in the spot for the disabled.

It didn’t take long for me to read the questions to Mother and fill in the answers, which I could have done without reading them to her, but she might as well know what’s going on.  In case they ask her about “her” answers.

“Why isn’t anyone coming?  It doesn’t look like we’re going to get help sitting here.”  Mother said.

“The woman at the counter said to fill these out and come back.”  I said, getting up and helping Mother and we were back up and moving back across the room to the appointment counter where we were handed our number to wait in line.

I spotted an empty seat in a row near us and pointed Mother in that direction.  She didn’t want to sit between a middle-aged Hispanic man dressed for construction work or yard work and a pretty, late twenties, black woman in office attire.

“Move the chair here.”  Mother gestured to the spot where she stood in the path behind the chairs.

She moved slowly around and sat down.  The young woman smiled at her and the man offered me his chair.

The young woman’s number was called and she was up and moving and I sat down.  Just in time as the patrolwoman was moving people out of the space where I’d just been standing.

Eventually our number was called and I went half way around the room to our numbered cubicle and told the young woman there that my elderly mother was coming.  I watched Mother slowly moving our way in her purple slacks, short sleeved silk blouse with its profusion of purple and pink flowers, small yellow dots at the center of each flower and trailing green leaves.  Her graying hair was combed perfectly and her purplish-pink lipstick matched her blouse.  People moved aside for her as she slowly threaded her way through the maze of people and cubicles.  Once she arrived, the woman behind the counter treated Mother with deference and gentleness, calling her “sweetie.”

We moved on from there all the way back around the maze of cubicles to stand in line to have Mother’s picture taken for her new ID.  The woman behind that counter called her “honey” and smiled softly at her.  When that was finished, Mother thanked her and turned away and I leaned around the front and thanked her as well.  The look on the woman’s face changed from soft and patient and kind that she’d used with Mother to all business with me.

We made our way slowly outside, Mother’s cane thunking down ahead of her, her steps a half slide, a half small lift of each foot, out the door, down the sidewalk, along the passenger side of the car, the cane stowed in the back seat and eventually, Mother collapsed into the front seat.

“I’m so glad we had an appointment.”  She said.  “What would we have done without one?”

“We’d still be in that line.”  I pointed to the end of the building where the last person in line waited on the sidewalk.

“No, it really wasn’t.”  Especially since total strangers from every walk of life, every age and every style of dress, had treated Mother with respect.  Daily we hear and read news about stressed out people, random violence and planned terrorism, but there’s hope for us as a people, when the elderly are still respected and given patient regard.  And believe me, as I inhabit the same space as the elderly, I know how important it is to look outside myself and think about the need of that person who has aged beyond the vibrancy and strength of youth and is in the stage of pushing through, going on with life, even though life has become tough.  Today I saw some of the good in us as humans: and it was given to a small, elderly woman in purple with graying hair.

4 thoughts on “Respect in Purple and Gray”