Today my brother got inside one of my rentals in Nashville.  Finally – after weeks of my trying to coordinate schedules between him and the tenant.  He does his best to look after things since I’m not there much these days and I’m grateful for his willingness to help, to be my onsite eyes.  I know it’s a frustration to him to have to work with a constantly moving target and it’s a frustration to the tenant to know that her life will be disrupted for those few minutes.

Two thousand miles to the west, out the curving highway that pushes its way through the verdant, lush, rolling hills of Tennessee, through green valleys and mountains of central Arkansas, across the grass plains of Oklahoma, north and up and over its western mountains, ever gaining height to the magnificent peaks of Colorado; then descending from their heavenly aeries down into the high desert of New Mexico, the summer heat in an impossibly blue sky brewing huge billows of white that erupt in lighting and thunder and water that kisses the sage and pinon pine so that they live another year; the highway rolls on, slowly loosing height in Arizona as it skirts the deep ravine that is the Grand Canyon, moving on to travel south of the lower tip of Nevada to snake below sea level across the California desert until it reaches its destination in the Pomona Valley, once known for its oranges, now a tired city inhabited by ever increasing percentages of Spanish speaking people who work and play and raise their children and survive in a town where the heat of the summer and the decreasing property values hang over the atmosphere. 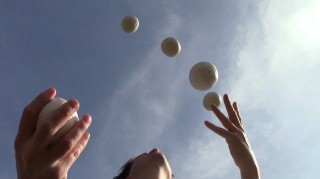 There I live as ringmaster in my little world, playing the juggler, tossing up balls: the rentals, the tenants, my brother, the cost of owning property, the income they bring in; the balls go up and down, each one caught and tossed high again and again, periodically joined by new balls: the washer is on the fritz, up goes a ball; the gate and fence are broken down, up goes a ball; the porch light hangs precariously, its electrical wires exposed to the elements, up goes a ball; the roof is leaking, up goes a ball.  And on and on, the balls go round and round and up and down; my arms tire, my resolve flags, but I summon forth new resolve as the tenants pay the rents and so the circus act continues another month.

Maybe I’ll just chuck the whole thing and let that load slide off my hands to land where it may, affecting what it may, my eyes and mind numbed shut by the daily frustration of managing property; equally difficult whether from a distance or near.  Of course, part of that frustration gag is that the tenant doesn’t tell me when there are problems, which means I can’t stay ahead of the maintenance and cost curve rabbit.  I want her to understand that I don’t want to be a slumlord.  It costs much less to keep it up peeling as we go along than it does to rebuild a portion of the fence.  Is she used to no one caring?  Has she become accustomed to people treating her badly, hitting at her and doing battle with her spears instead of treating her with respect?

And if I just let it all go, there goes any retirement equity right along with it, and then there’s the mortgages to deal with and the resultant cratering of my credit, so no, I don’t drop the balls; I keep on catching them and tossing them heavenward once again, this time with a prayer and a plea: give me strength, God!  I can’t see that my arm muscles are any larger or firmer, but my prayer muscle sure is. 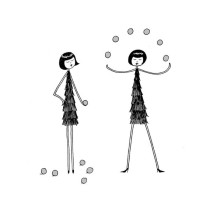 I’m hit with the thought that recurs with frequency these days: anything worth having takes work.  I’m pretty sure that was one of the first lessons I learned as a kid.  It took work to keep the family fed and the clothes washed and the bathrooms cleaned and the furniture dusted and the beds made and the dishes washed and the car running and the lawns mowed and then there was homework to do and places to be on time because Daddy didn’t like being late and we’d better not hold up the caravan.  All four of us kids had our appointed tasks and we don’t seem to be any the worse for it, now that we’re adults.

What happened to that knowledge?  What changed that there are whole segments of society that believe it’s the job of someone else to meet all their needs?  Did not everyone get the memo that was lived out in our house?

Somewhere along the side of the winding highway that we travel between the cradle and the grave, or perhaps behind the pretty façade of our socially acceptable fashions and haircuts and fast cars and big houses; or possibly lost in the thrill of having the latest technical toy that works at lightning speed so that we’re always entertained; somewhere in all the stuff we find necessary in the 21st Century, that truth was lost: anything worth having takes work.

I admit that I find it just as easy as the next guy or gal to let someone else do the heavy lifting, but a funny thing happens when that becomes my pattern, I get bored.  Dissatisfied.  Unfulfilled.  Depressed.  Lethargic.  Nagged at that this laziness is eating through my soul and will leave me morally and ethically cratered and one day, instead of waking up to a fresh morning, my soul will drift along the ceiling looking down on my wasted form which has turned to dust and is sifting away in the slight movement of the air in my stale bedroom.

So, bring on the balls, let me get juggling.  There are tasks to accomplish; places to go; people to know, cities and towns and countries to see, and life, life is out there for the taking.